The Tree that Jaya Grew: Using Tree of Life in the Rural Indian Himalayas 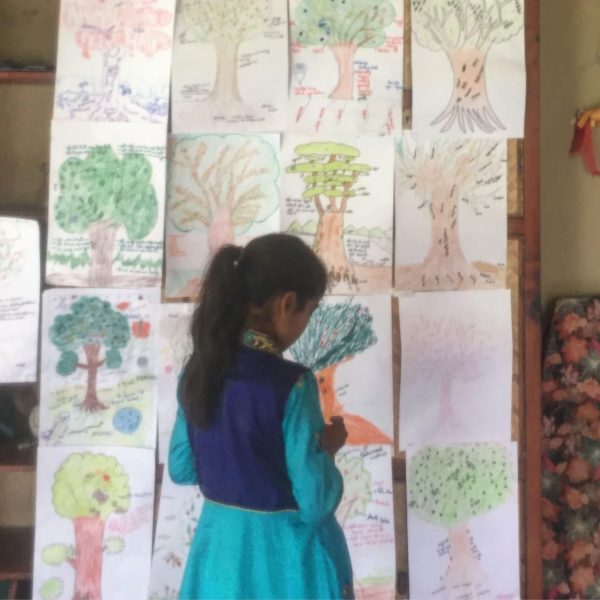 Jaya* was only 9 years old when I met her. She lived across the path from the house where I was staying, in a village at the foothills of the Indian Himalayas. The village was quiet most of the time – stumpy mud houses with slate roofs, new pillar-box concrete houses painted lollipop colours, bordered by small step farms where wheat, corn and rice were grown in a cycle throughout the year.

The quiet was broken by the lowing of cows and buffalos as they were taken to graze. The quiet was broken by the shrieking of children running in and out of each other’s courtyards, rolling tyres with sticks and pumping the latest Bollywood tunes from their worn Nokia phones. Jaya was one of these kids, the first to run up to our veranda after school, and the last to leave when the sunset broke into darkness.

The quiet though was also broken sporadically by the shrieks of Jaya’s mother. Early in the morning, late at night, her mother, her grandmother and her father would put on a show for the whole village. Their fights were vicious and physical - insults were hurled, sticks taken up and bottles shattered. Worried and nosy neighbours tinkered and whispered from their own courtyard viewing points, calling the police time and time again, but the family would continuously deny disturbance.

The effect of this atmosphere on Jaya, the youngest of four children living in the house, was palpable. She was quick to get angry, she would cry without reason. When we tried to speak with her about her troubles, she remained tightly bound. Except when she was drawing. She would come sometimes to our house and quietly take up a sheet of paper and some coloured pencils. She would draw vistas of her perfect family, paragliders winging the mountains, lush gardens and chirping birds.

So when she came to a self-care workshop we ran in the village community centre, and worked with us to build her own Tree of Life, we saw the bindings release. Tree of Life was a gift for me, as an anthropologist working on the mental health of women and girls in the rapidly changing Himalayan village. It allowed me to reveal the hopes, desires, traumas and dreams of my adolescent informants - in a way that interviews or even participant observation could not touch.

Tree of Life itself is an arts and storytelling methodology that allows participants to explore their roots, their strengths, and the gifts they have been given. It allows participants to bring their trees together in a forest, where they can discuss their troubles as storms that they might face together, and the ways they can support and affirm one another to weather them. Tree of Life therapy was designed by Ncazelo Ncube and David Denborough in South Africa in 2006. Since then it has been used across the world as a tool for healing, helping people like Jaya to move beyond the violence and abuse that has affected their lives.

My experience using Tree of Life opened my eyes to the power of arts-based methodologies in exploring mental health problems. It allowed me to build a therapeutic space where trauma could be delicately revealed. It allowed me to acknowledge pain where words didn’t quite contain the acuity of experience.

The Tree of Life was pioneered globally by Ncazelo Ncube. Yet, while Tree of Life has been growing around the world, Ncazelo’s work in South Africa through her organisation Phola, has experienced significant setbacks caused by a shortage of funding for mental health projects. With greater resources, she could reach so many more people. In collaboration with Ember, Ncazelo is appealing for support to reach more people with the Tree of Life therapy in South Africa. You can support Tree of Life by donating to Ncazelo’s crowdfunder here.

*Jaya is not her real name.

Nikita Simpson is a PhD Candidate in Anthropology at the London School of Economics. She is currently conducting ethnographic fieldwork in a village in the rural Indian Himalayas on women’s mental health in the face of rapid social and economic change. Nikita is also a co-Founder of Ember.